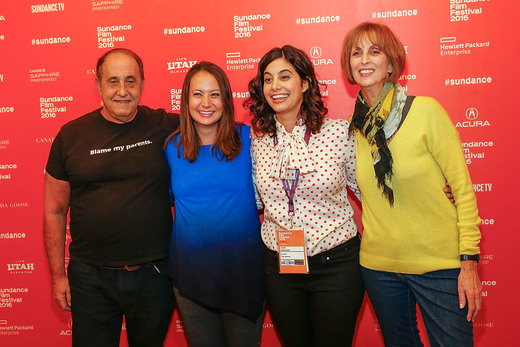 I just returned from the Sundance Film Festival celebrating the premiere of our younger daughter Jessie Kahnweiler’s web series.

Not so humble brag for a moment:) THE SKINNY, is a six episode dark comedy, produced by Refinery 29 and Jill Soloway’s Wifey TV about a character named Jessie who finds her way in LA and in life. I am so proud of our daughter as the creator of this series and I hope you will check it out and share it with others. The topic of eating disorders and body image is one that needs to be talked about. It is still shrouded with lots of shame. I hope The Skinny will be a way for the conversation to have a larger audience.

During the days we were there Jessie was tied up with press and meetings so we had time to wander around, catch a few films and soak in the experience. I loved the Sundance vibe. People who come LOVE film and there is a rich melange of industry folks and cinephiles.Of course, there are other folks who come to have a good time and soak in hot tubs while gazing at snow covered mountains and celebrities.

I was  drawn to the film folks who are dedicated to their art. They are my models of persistence and tenacity. They tell compelling stories on screen and it can take years to get one film made. I cried tears of joy and sadness in the darkened movie theater.

Flag Without a Country  gives a face to the resilient people of Kurdistan. Cameraperson  takes us behind the camera and shares some riveting footage from around the world. I loved Uncle Howard  which tells the story of Howard Brookner, taken by AIDS at the age of 35. His nephew is the director and it includes many fascinating clips of the author William Burroughs.

The filmmakers were from all over the world and in every aspect of the film business –  producers, actors, managers, film festival programmers, DP’s (Directors of Photography), editors, writers, etc. etc. They accomplish the yeoman’s feat of getting a film made, sold and distributed and continue to hone their craft and learn from others.

I haven’t officially surveyed those in the film industry but my guess is that there are lots of introverted types. Even the more extroverted creatives tap heavily into their quieter sensibilities. They are thinkers and creators with active internal lives.

Here are a few ways in which I observe those introverted strengths surface at Sundance.

*Time to think: . Figuring out that next shot and percolating an idea takes quiet time and reflection. Filmmakers take that time.  In The Genius of Opposites , Jessie shared how on a previous film she directed, as an extrovert, she was frustrated when her DP didn’t respond to her many texts as they prepared for a shoot. He then arrived with a large organized notebook that incorporated most of the ideas they had been exploring. She realized that he had needed to go at his own pace to process the incoming stimuli.

*Quiet Vibe:  Though there were thousands of people attending Sundance,  the tone was quiet (during the day at least!). This might have been because we were all focused on staying warm on our way to see films and pick up swag! No popcorn munching or fidgeting took place.The vibe resembled a library or church atmosphere. The experience of seeing a film connected  us and we all relished having the quiet space to think and feel.Respect for the work and for the people who made these films was evident at every turn, especially at the end of each of them when the silence was broken and everyone clapped with enthusiasm.

*Deep conversations were everywhere about what movies we were about to see, or what we had just seen.  Introverts tend to go deeper rather than broader than extroverts in their conversations. Even random encounters with strangers on the bus or waiting on line for films quickly moved to discussions about character motivation and plot twists. There were opportunities to share our insights and enthusiasm with others who share our love for film.

For many reasons, Sundance was an experience I will never forget. I gained even a deeper respect for filmmakers.

I also believe that we all  grow and connect with each other when we slow down, incorporate more time to think, adopt a quieter vibe and delve more deeply into rich conversations. We each have stories to tell and can inspire each other, just as the filmmakers at Sundance have so beautifully done.