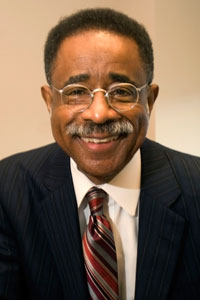 The world lost a great man last week. Dr. Roosevelt Thomas, Jr. passed away suddenly. His family, church,  professional colleagues and hundreds of friends spilled out into the street at Friendship Baptist Church to honor him on what would have been his 69th birthday.

I had the rare privilege of knowing Dr. Roosevelt Thomas, Jr. in recent years as a fellow Berrett-Koehler author and colleague. We had a several thoughtful conversations and I was impressed by his openness to learning new marketing approaches for getting his messages out into the world.

Roosevelt was  a trailblazer in diversity, a past Dean of Clark Atlanta Business School, Secretary of Morehouse College and a widely known consultant and thought leader. I remember hearing him speak to a group of HR managers at a local Society of Human Resource Management meeting where he presented some provocative new ideas about how we must embrace differences and reject assimilation. Do not ignore the issues of race and gender, he said.  Dr. Thomas redefined diversity as a business issue that speaks to the bottom line.

As the sun poured in on that packed sanctuary, It was obvious from the many heartfelt tributes that Roosevelt made a true difference in this world. One mourner quoted an African proverb, “You are only dead when you are forgotten”, expressing what we all felt; he will never be forgotten. His lovely daughter, April encouraged us to take his baton and take action.  And while friends and family  noted his numerous achievements and incredible work ethic, what they spoke of most was his humility and the way he listened before he spoke. He was the epitome of an introverted leader and quiet influencer.

Roosevelt, may I savor your silent humility and call it up before I have an urge to “talk out” my thoughts. Thank you for that gift and for the many others you bestowed upon the world. RIP.