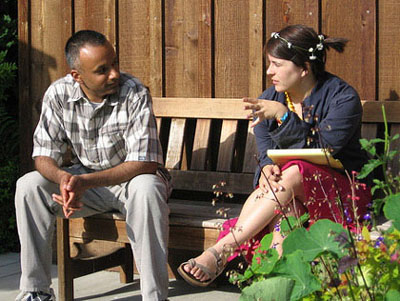 The art of random, spontaneous conversation has been replaced by that phone in our pockets. We wait on line at the grocery store and out it comes.  We sit on the airport runway, heads down, engaging with our screen rather than with each other.

Yes,  the world is certainly opened up to us as we connect to our friends, scan news feeds, and listen to music all while reading a novel! Learning has never been so immediately accessible. Yet, I have to ask what we miss by skipping over spontaneous conversations wth strangers? I believe it is the chance to learn from others and about ourselves.

Several years ago, I turned my phone off before takeoff and my seatmate turned out to be Mike “Doc”  Emrick, the chief NBC hockey announcer. He was a lovely guy and on the flight from Tampa to Atlanta, Mike revealed behind the scenes insights about the players and the amount of research and prep he did before each game. I never watched a hockey game the same way again.

In the Genius of Opposites, I shared a story related to this topic. After hearing my speech at the American Library Association on how much we can learn from having  spontaneous, focused conversations, an introverted librarian named Beth wrote me. She said, “Vegas was a hard town to be in as an introvert. That night, as I hailed a cab, I was overly tired and just wanted to get to the hotel and away from the crush of people. . . . The cabbie started talking with me, something I generally avoid, but I thought about practicing “engaged listening” and decided I would try it. It turns out, we had an amazing conversation about the Nag Hammadi codices and the educational system in Nevada.” Beth went on to say that she was grateful she took the time to listen and learn from this extroverted driver.Being open to listening and having conversations with strangers can expand your world.

Finally, one bar owner in England  wanted to bring back the art of spontaneous conversation to his pub. He took charge and “installed copper wire mesh in the bar’s ceiling and tin foil on the walls, effectively blocking cell phone signals from getting into the establishment,” according to a story on NPR.  And the good news? Without cell phones, the owner, Mr. Tyler says that “people love it – they are actually talking with each other.”

It is up to each of us to take back the precious spaces for random conversations to bloom. And we will never know the pathways that can open if we stay exclusively attached to the machine in our pockets.