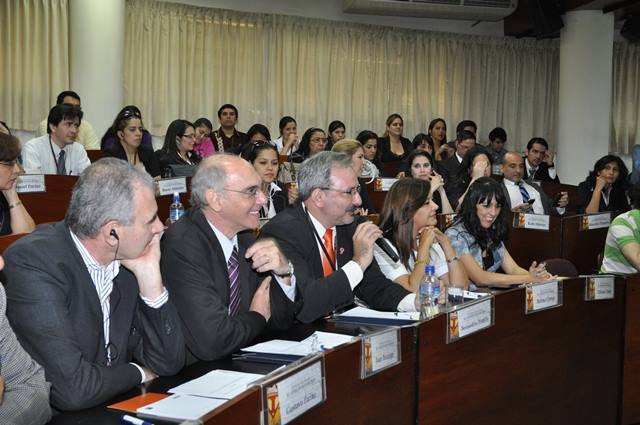 Bernardino Portillo, General Manager of Medalla (holding the mike) at El Lider Introvertido workshop this Wed. at the Universidad Americana in Asuncian, Paraguay.

One of my introverted leaders heroes is leadership guru and former CEO of Campbell Soup Company, Doug Conant. He share how he eliminates the guesswork in getting to know him by offering up a document that lays out his beliefs, values and even his favorite books and quotes.

I profiled Doug’s examples and those of two other chiefs in a piece I wrote for Chief Executive called How CEO’s Can Use Quiet Influence to Get Results.

This past week on my trip to Asuncion, Paraguay to speak on the El Lider Introvertido (more on that in my next blog post!) I met a wonderful man named Bernardino Portillo Marin, General Manager of a company called Medalla. He is well respected by his employees as being a man of few words but great impact. Bernardino strongly believes in leadership development and his advocacy for growing his people is evident everywhere.  Bernardino was fully engaged in the programs we had over the few days and his presentations were beautifully crafted. He put effort into flexing his style and the respect he has earned his palpable. I also found it refreshing to connect with him on Facebook and see that he interacts with many of his employees thoughtfully through this social media platform.

Quiet Influence is combination of art and science and these Chiefs are great models to observe and learn from. They are also really nice people.