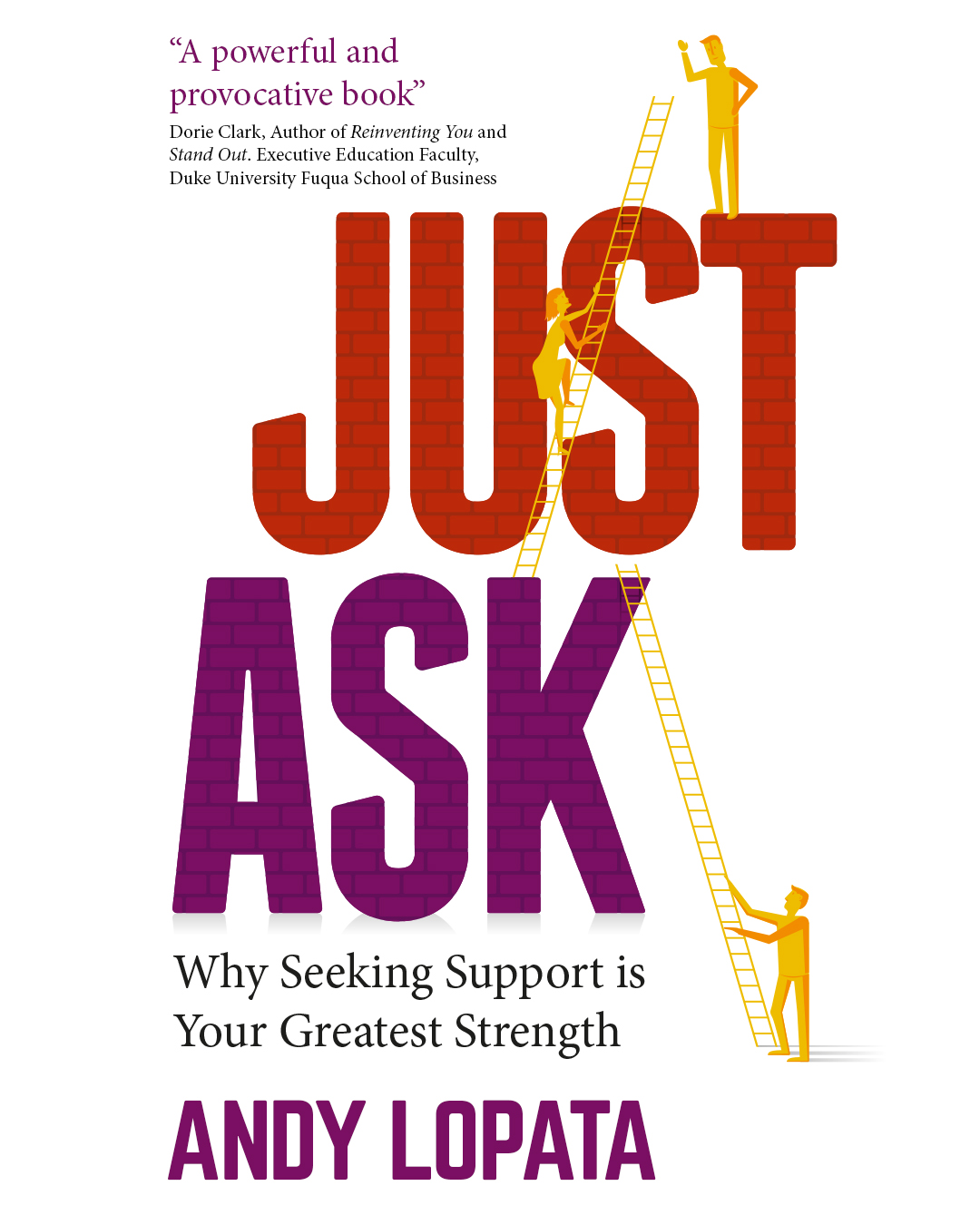 Just Ask: Why Seeking Support is Your Greatest Strength

I met my friend and colleague, Andy Lopata at a conference in Vancouver several years ago. He truly listened and had the natural ability to connect with just about anyone. I was not surprised to later learn that my new friend was named “one of Europe’s leading business networking strategists” by the Financial Times and “a true master of networking” by The Independent and Forbes.com. We have both asked each other for help many times, and he has always come through.

In addition to several books, Andy is the author of the just-released Just Ask: Why Seeking Support is Your Greatest Strength. I was honored to contribute to his latest work where he addresses how introverts approach this topic. You will read about how Andy gets people to share poignant and impactful stories. He demonstrates the power of being vulnerable in all kinds of settings. He kindly offered this guest blog post excerpt. Consider buying this important new book.

What Is Holding Us Back From Asking For Help?

As a society, I believe that we are too slow to ask for help. The vast majority of us are brought up to believe that we need to know all of the answers, find solutions independently, and look good. The rise of social media and the Instagram and Snapchat-fueled selfie culture has compounded that belief, driving an obsession with creating the perfect look and the perfect life for our online followers.

It’s not just about online interactions with relative strangers though. How often do you truly open up and be honest with your friends and family when asked how you are?

A decade or two ago we were overwhelmed by self-help gurus telling us to stop responding to the question ‘“How are you?” by simply saying “I’m OK” or “Fine, thanks.” Instead, they told us to be positive. Suddenly everyone was saying “I’m brilliant”, “I’m fantastic”, and “I’m great”, with a broad toothy grin that often hid a very different truth.

I noticed something similar within the professional community. I’ve been lucky enough to be a member of the Professional Speaking Association (PSA) in the UK since 2003. The people I have met through the PSA are more than competitors, associates, and colleagues; many of them are my friends. We call each other “our tribe” and we mean it.

Yet even though we identify as friends, we are still not honest enough with each other. When we meet and catch up at regional meetings and conferences, behind the pleasure of seeing our friends we still want to shine. The same drive to look good is prevalent within a community of people who enjoy supporting each other.

But we don’t always mean it.

Lying to Others — and to Ourselves

I remember attending a regional PSA event a few years ago. One of the speakers was Steven Houghton-Burnett, who made a fortune by starting, growing, and selling one of the UK’s first internet service providers and went on to be an excellent business and motivational speaker.

Steven was running a workshop that day and handed every delegate a questionnaire to complete at the beginning of his session.

One of the questions was: “What stage is your business at in its development?

Not one person in the group was prepared to admit that their business was in decline. Everybody had a business that was either in its early stages, mature and stable or growing.

The need to look good can often stop us from sharing, even with our closest family, friends, and colleagues. We want them to think the best of us and that need overrides the possibility of getting support or advice that might change our situation or at least make it more bearable.

Prince William and Prince Harry have spoken out a lot about the “‘toxic masculinity” that prevents people from sharing, particularly young men. In a 2017 interview, The Duke of Cambridge said, “For too long there has been a taboo about talking about some important issues. If you were anxious, it’s because you were weak. If you couldn’t cope with whatever life threw at you, it’s because you were failing. Successful, strong people don’t suffer like that, do they? But of course, we all do. It’s just that few of us speak about it.”1

I believe that people are now ready to see these myths busted and create a new world view. One where it is not only OK to be open, honest, and vulnerable, but also where it’s positively encouraged. The success of Brené Brown’s books and TED Talks2 on the power of vulnerability and the willingness of big business to embrace the message suggests that we’re more receptive to the need to change our approach than ever before.

It’s important for individuals to know that it’s OK to acknowledge what we feel, what challenges us, and what is holding us back. You don’t need to be positive all of the time. If you need support, just ask.