One of the best things about going on the road to give speeches (aside from sampling the local cuisine) is to see how workplaces are evolving. Recently, I had the honor of delivering a keynote to the folks at the American Chemical Society and their Chemical Abstracts Service. CAS, as it is known, “is made up of scientists who collect, and organize all publicly disclosed substance information creating the world’s most valuable collection of content that is vital to innovation worldwide.”

After lunch, I was taken on a tour of the Columbus, OH facility and heard the story of how they are transforming much of their building to meet the demands of a new work flow.  The software developers in the IT area, for instance, have adopted Agile as the way they perform work. This is an approach to software development under which requirements and solutions evolve through the collaborative effort of self-organizing and cross-functional teams and their customer(s)/end user(s). This lends itself to ongoing discussions and connection throughout the day. In the “before” photo below, you can see how many of the offices were set up in what they call “submarine hallways.”

Joe Sjostrom, Director, Product Technology, and Operations at CAS is an astute introverted leader who shared his experience in this transition from offices to open space. At first, he was very skeptical, but now says he would never go back to the old ways. In fact, his office sits smack dab in the middle of the open space, near the feeding bowl for the cat. Yes – there is a company cat who hangs out with everyone.

Joe explained why he thinks introverts thrive in this new open work space, contrary to what you might expect; that they would hole up away from people. 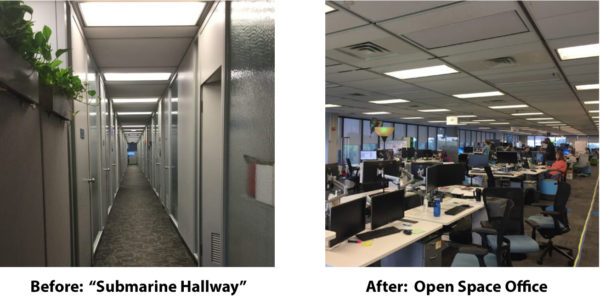 “I’m really glad you got the opportunity to see our new work space” he wrote me in a follow-up email. “Regarding introverts and work environment, I’m sure many would balk at a statement that ‘open spaces are good for introverts’. The key issue is that the work of software application development has changed from what used to be a mostly solo activity to what is now a highly collaborative activity.”

Joe continued, “So the work environment has necessarily evolved, and the (surprising/counter-intuitive) discovery is that software engineers (in general, a highly introverted population) are actually able to adapt in a very positive way to this new environment. As I see it, we introverts don’t actually ‘change’, there is still a strong bias for some element of isolation.  But my experience has been that the human mind is actually much more highly adaptable and without actually being physically isolated, the open environment can be well-tolerated – and the overall team productivity is greatly enhanced. As I mentioned, I can hardly comprehend how we ever got work done in the ‘submarine hallway’ days!”

Joe also told me that most team members learn to tune out extraneous conversations but will chime in when they think they can contribute. He also said that the headphones they ordered were not used.

The wave of the future is connection and collaboration. And while having spaces and places for breaks can help, the bottom line is that more work is getting done in this open space. In fact, the marketing director told me her work area is removing offices and creating a new open space environment to support the new Agile work processes they are implementing.

There might be a reason to keep a few old offices that offer privacy and quiet. A few of the editors and proof readers said they LOVE those submarine like spaces with doors because they can concentrate. So maybe some work functions won’t ever find it necessary to change. In this collaborative software development department, though, they have gone “all in” and are not looking back. The results are speaking for themselves!