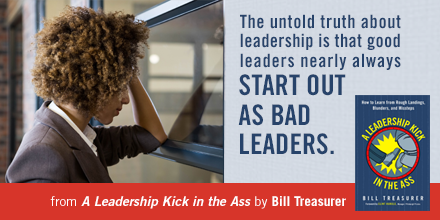 Getting Honest About the Leader You Are

I am so pleased to share this guest post from my friend and colleague Bill Treasurer, whose great new book A Leadership Kick in the Ass comes out Monday! This book is not afraid to share the truth about what it takes to truly lead. One of those truths is that “good leaders nearly always start out as bad leaders.”  Here is more in Bill’s own words.

I learn a lot from every leader I work with. For over two decades, I’ve been fortunate to have worked with thousands of leaders across the globe. For the last dozen years, most of my work has been with unionized Chicago-based construction companies. These are leaders who do real, in-the-trenches work where the consequences of mistakes can be catastrophic. Some of the leaders with whom I work lead giant multi-million-dollar projects on Chicago’s highways, transit lines, and at O’Hare airport.

One thing my work with leaders has taught me is that nothing stunts leadership growth as much as closed-mindedness. When your ability for self-reflection is shut down, personal accountability is next to impossible. Blaming others or giving excuses for our own faults, mistakes, and imperfections is, sadly, an all too common response.

How a leader takes feedback says a lot about just how open his or her mind really is. In my work with leaders, I sometimes have them go through a 360-degree feedback process, where the people they are leading rate the leader’s style and performance. The raters often include the leader him or herself and the leader’s boss, peers, and direct reports— hence a “360-degree” view. The feedback uses an anonymous survey consisting of quantitative data and qualitative (open-ended) questions. The idea is that people are likely to give more honest answers if they don’t feel threatened that the leader will retaliate against them for their honest feedback.

Leaders within the same company and in similar jobs often have dramatically different responses to the sting that sometimes comes with the feedback yielded during a 360. For example, one leader with whom I worked, a guy named Bruce, got feedback that he was “petulant”, “irrational” and “blockheaded”. His response to the feedback? He blew it off, rationalizing that it was just the sour grapes of poor performers.

Bruce’s response was very different than another leader I worked with at the same company, a guy named Derek. In some respects, Dereck’s 360 was even more biting. Words used to describe Derek included “hot-tempered”, “explosive”, “edgy”, and “harsh”.

At first, Dereck got defensive about his feedback too. Then he got quiet. Then he asked me, “How do my results compare to others.” I replied, “Not too good.” So Derek and I set out to change things. For the next six months, we met every two weeks for coaching. During that time he defined the leader he’d like to be led by. He started investing time with his direct reports to listen to their needs. He started keeping a leadership journal. And he started taking better physical care of himself.

I wasn’t fully aware of how earnestly Dereck had been about assimilating his 360 feedback until five years after coaching him I started working with two of his direct reports. Both of them spoke in glowing terms about what a mentor Dereck had become for them, and how he had inspired them to get interested in leadership too.

And what became of Bruce? He remained a blockhead, and, not surprisingly, got fired.

It takes a very self-aware and courageous leader to say, “I was wrong” or “I messed up” or “It was my fault.” Yet, saying these powerful words often endears a leader to those being led. There is something completely disarming, and even attractive, about a leader who admits when he or she is wrong. Something profoundly important is revealed and communicated when a leader admits a mistake: humanness.

Bill Treasurer is the Chief Encouragement Officer (CEO) of Giant Leap Consulting, Inc. His new book, A Leadership Kick in the Ass, focuses on the crucial importance of leadership humility. He is also the author of international best-seller Courage Goes To Work, which introduced the new
management practice of courage building and Leaders Open Doors, which became the #1
leadership training book on Amazon. Bill’s clients include NASA, Saks Fifth Avenue, UBS Bank, Walsh Construction, Spanx, the Pittsburgh Pirates, the U.S., Department of Veterans Affairs, and many others. Learn more at: www.BillTreasurer.com, www.CourageBuilding.com/Kickass. Free leadership video tips at: https://www.youtube.com/user/GiantLeapConsulting